Christopher “Topher” Maraffi, an Assistant Professor in FAU’s School of Communication and Multimedia Studies, recently received a $30,000 Digital Projects for the Public Discovery grant from the National Endowment for the Humanities to create preproduction designs for an augmented reality tour of Mitchelville, South Carolina Gullah-Geechee Heritage Site. The first Southern town established for freed enslaved Africans during the American Civil War. Topher has also received an Epic Games Megagrant of $30,000, Magic Leap headsets and a Walter and Lalita Janke Emerging Technologies Fund award.

The original look, design and architecture of that town, Mitchelville, no longer exists, but the structures, trees, roads, and people that lived there in the early to mid-1860s – all documented in photographs and written descriptions -- are being recreated by Professor Maraffi through an elaborate 3-D computer-generated, Augmented Reality (AR) application where visitors can get an AR tour as they walk through the original site, now known as “Historic Mitchelville Freedom Park - Where Freedom Began.” 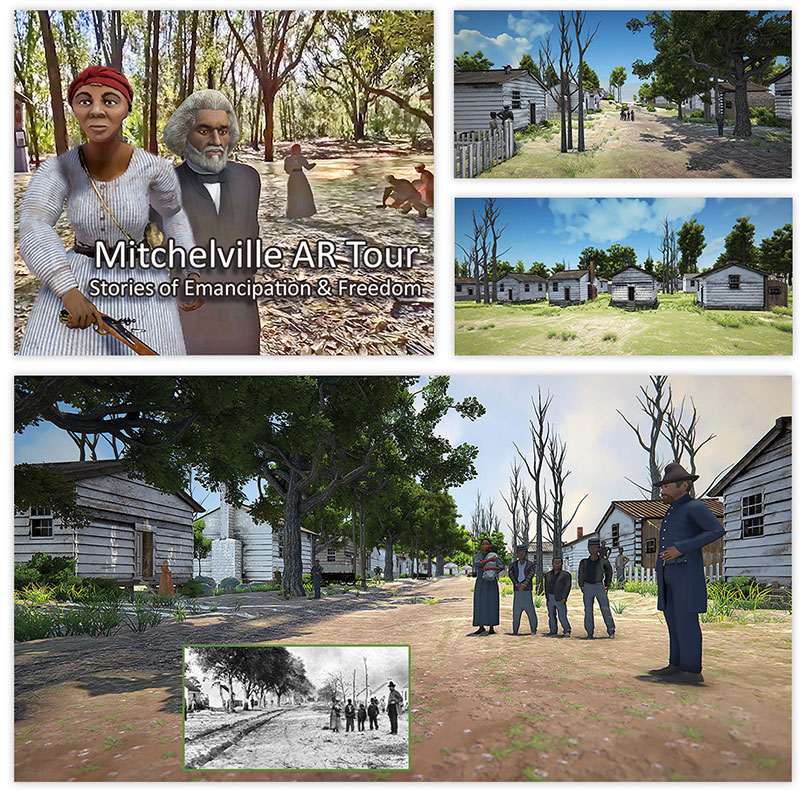 Augmented Reality is an inter-active experience of a real-world environment where the objects that reside in the physical world are enhanced by the placement of sound and computer-generated 3-D images that are viewed and experienced through a hand-held mobile device or AR headset. Professor Maraffi’s graduate students in the Media, Technology, and Entertainment MFA program are developing the Mitchelville app for the Magic Leap headset, a local company headquartered in Plantation.

Mitchelville was named after Union Army General Ormsby Mitchel. It was established in 1862 and had 1,500 residents by 1865. Historic Mitchelville Freedom Park is located on the former site of the Drayton Plantation in what is now known as Hilton Head Island, South Carolina. The tour will feature virtual tour guide Frederick Douglass, and other historical figures like Harriet Tubman, who was a nurse, scout, and spy for the Union army on Hilton Head.

Mitchelville was part of the Port Royal Experiment, an effort by Abraham Lincoln and Northern abolitionists to give civil rights to emancipated Africans along the coastal southern states, now known as Gullah Geechee peoples. “The Epic Games Megagrant is mainly funding work on the Mitchelville project by graduate students in our Media, Technology, and Entertainment MFA program, and work by faculty and students at other universities,” Professor Maraffi said.